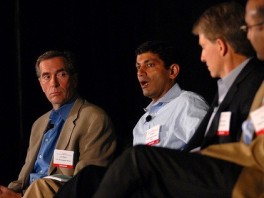 to Dr. Aniruddha Nazre,, Partner at the most respected VC firm in the world:

Dr. Nazre has happily agreed to devote 2-3 hours of his time on 22nd

for about 5-6 meetings with individual entrepreneurs or companies in

Pune.The event is free for everyone but please understand that the

For those who want to schedule a 1:1 meeting with Dr. Nazre between

3-5pm on that day, please send me a mail with a one-page synopsis of

your company containing what you do,who you are (including other mgmt

Dr. Nazre is KPCB’s partner looking after their India portfolio but he

Dr. Nazre did his schooling in St. Vincents Highschool and then

he was the University Gold Medalist. After…….

Aniruddha Nazre is a venture partner at Wellington Partners since '12. Aniruddha Nazre was EVP and CSO at Reliance Industries Ltd '12 to '15 where he was responsible for launching "Jio", a Telecom and Digital Media Services venture that will connect 500M Indians to the internet by the end of 2016. Before joining Reliance he was a Senior Partner at Kleiner, Perkins, Caufield & Byers from '03 to '12. Aniruddha made 19 investments with 11 exits. Aniruddha Nazre successful exits at KPCB included LuxVue (acquired by Apple), 3DV (acquired by MSFT), Virsa (acquired by SAP), Vertica (acquired by HP) and InfoEdge (IPO in 2006). He worked at SAP from 1998 to 2003 for Hasso Plattner, CEO, Chairman of SAP. He has a PhD in Engg Mechanics and BE and MS in Mech Engg. He holds 7 patents and has published 15 peer reviewed articles. View all posts by Aniruddha Nazre